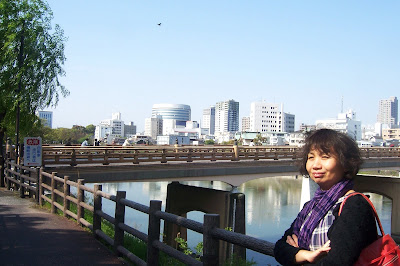 For seven days the weather was perfect. Golden warm, sunny, with blue skies and a light breeze. Now, I consider a seven days without rain in Japan a small miracle. That those seven days just happened to align with Golden Week was something like divine intervention—or perhaps good karma after my disastrous Yokohama trip.

On April 29th, I rode the bullet train up to Okayama with Masako. Masako is a friend who volunteers as a guide at San Gan’en, the main tourist attraction in Kagoshima City. Her English is excellent. After a half hour or so, I completely gave up trying to speak Japanese. My bumbling attempts seemed pathetic next to her very polished English. I asked if she knew what the specialty food of Okayama was. Kibidango, she said. She was planning to take some home to her kids as a souvenir.

Okayama, as it turned out, has many specialty foods. Muscat grapes and giant peaches were famous, too. I asked someone how big these giant peaches grew, and he held up his hands to indicate the size of a small pumpkin. Incidentally, this probably explains why the legend of Momotaro, the Peach Boy, hails from this area.

A Statue of Momotaro and Friends

Long ago, an old man saw a huge peach floating down a river. He brought it home to his wife to eat for supper, when, lo and behold, the peach split and out popped a healthy baby boy. The childless old couple adopted him and named him Momotaro. (“Momo” means peach in Japanese.) When Momotaro grew up, he decided to seek his fortune. Along the way, he met a dog, a pheasant, and a monkey, and gained their valuable services by sharing some kibidango with them. Together they traveled to Oni Island and defeated the demon that lived there. (“Oni” means demon in Japanese.) The four companions shared the demon’s treasure hoard, and they all lived happily ever after.

The statue of Momotaro just outside Okayama Station was a little smaller than I expected, but cute nonetheless. The station itself was a maze of small shops: places selling honey water and fresh waffles and all the kibidango you could hope for. (No giant peaches though; they were out of season.) But toward the back of the station, where our hotel was, it was surprisingly quiet. As soon as we stepped outside, the crowds melted away.

That first night, Masako and I spread our futons on the tatami mat floor and did crossword puzzles from a book Masako had bought. This became a tradition all the while we were in Okayama. These puzzles were both easy for me and hard at the same time. For instance, I knew the name for a prehistoric flying dinosaur, but can anyone spell the word “pterodactyl” off the top of their head with 100 % confidence?

The main tourist attraction in Okayama was Goraku-en, a garden ranked as one of the three most beautiful in all of Japan. I’ve said it before, but honestly, I don’t understand the ranking system. There so are many beautiful gardens in Japan. Why did this one deserve a medal?

Masako and I came to Goraku-en bright and early the next morning. I remember the long, sweeping green lawns, much like the quad at my college, and the clever use of “borrowed” scenery: Okayama Castle, which appeared pleasingly miniature in the background. An old rest house was uniquely designed with a stream splitting the building in half; people sitting on the floor could dip their toes into the water. There were small rice fields gone fallow, tea bushes, and cages filled with peacocks. And there were flowers, too.

I swear, every time I go on vacation in Japan, I become obsessed with some flower or another. The first time I went to Kyoto (in 2005), I marveled at the Irises. I was inspired by Cherry Blossoms in Yamaguchi and enchanted by the Hydrangeas in Hokkaido. This time, it was Wisteria. Purple and sometimes white flowers that hung like bunches of grapes from the vines. The straw roof of a tea shop in Goraku-en was wreathed in Wisteria. I ate peach soft serve ice cream just underneath them, while Masako sat in the sun and sipped green tea.

After visiting a few small museums near the garden, Masako and I made our way to Okayama Castle. We crossed a bridge over a river, and the castle grew bigger and bigger. Okayama Castle has the nickname of U-jo or “Crow Castle,” so named for its black color. The name is also a deliberate contrast to the white “Heron Castle” of Himeji. Unlike Himeji Castle, U-jo is a reconstruction; I liked it nonetheless. Black castles are cool!

Coincidently, U-jo was hosting an exhibition on my favorite historical era: the Bakumatsu*. It was called “Aizu, Choshu… and Okayama.” But I have to say that the exhibition contained precious little on Okayama, and I already knew about Choshu (Yamaguchi) and Aizu, having visited them before. Even more disappointingly, the signs were mostly in Japanese and no pictures were allowed. However, I did snap an illegal photo of the one English sign that actually explained Okayama’s role in this turbulent era.

Basically, the lord of Okayama was actually the brother (or at least half-brother) of the last Shogun in Japan, Tokugawa Yoshinobu. This, as you might imagine, made them enemies of Choshu. There was also one local hero who made great political gains in Aizu—which came to naught when Aizu was conquered by Choshu. Eventually, however, this man became governor of Okayama.

Masako and I visited another museum, but by 2:00 we had run out of things to see. So, we spent the rest of the afternoon wandering around the clean, pretty town and did some shopping. Masako bought cups of clear gelatin with fruit in it. I bought kibidango in peach, Muscat, and yuzu (citrone) flavors. We shared our feast for dessert that evening.

*Bakumatsu: the time from approximately 1853-1868, wherein an alliance between Choshu (Yamaguchi) and Satsuma (Kagoshima) succeeded in toppling the Tokugawa Shogunate. Plenty more detail in my blog. Just follow the link. 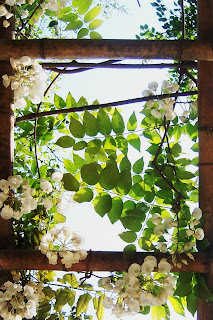