The First Week of School 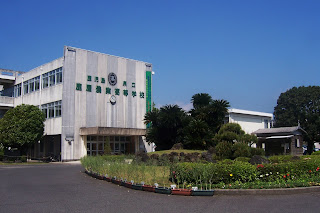 In case I haven’t told you this, I would like to state for the record that I have three different high schools I help teach at: Kanoya Kogyou (the technical high school), Kanoya Nogyou (the agricultural high school), and Kushira Shogyou (the commercial high school). As you can guess from my use of parentheses, none of these schools are academic; they try preparing their students for a vocation rather than from college. In addition, Kogyou and Nogyou are mostly filled with boys. There are just 24 girls in the population of 600 at Kogyou. Plus, I don’t have a car, so for Kogyou and Shogyou at least, I had to take the bus.

That Sunday night I had restless nightmares about missing the bus, and I awoke at 6:00 AM, filled with nervous energy. I got on the right bus, thanks in part to a kindly old man whose job seems to be to direct people at the Kanoya Bus Center to the right bus. I got to school all right, and almost immediately after that, I had to give an introductory speech in front of the whole 600 students and staff. I got through that short speech and had nothing to do for the rest of the day. But doing nothing was almost worst than giving the speech. I was awash with anxiety.

After lunch, both students and teachers must clean, so one of the English teachers took me to her classroom. On the way, we passed through the hall and the students peered at me through the window and called my name. Now imagine walking through the hall and having thirty or forty teenage boys who you don’t know all calling your name in a half-friendly, half-leering sort of way. It was intimidating. I mean, I’m used to being sort of invisible, tucked-into-a-corner-with-a-book. The sort of “instant celebrity” status I had, just from being a foreigner and a new teacher, was unnerving.

In fact, I was so unnerved that, when I got home from school at just after 5:00, I immediately called Rachelle, another Assistant Language Teacher from my office, and asked her how her day was. We decided to have dinner at Joyfull, a cheap, chain restaurant. (I wanted to go there because it has a cheap drink bar with unlimited refills—a rare thing in Japan—and I was parched.) I vented my anxiety out to her for at least a couple of hours. It was 8:00 when I got home, and I sank into bed shortly after.

The next day I woke up at 6:00 again and went to Nogyou. I didn’t have to give a speech in front of an assembly, thank goodness, but I did have to give introductory speeches to about 3 classes. I felt nervous and awkward, but I tried channeling that energy into something productive, a technique I learned in drama. I don’t really remember much of that first speech, to tell the truth, but at least the ice had been broken. I had taught in front of a class. 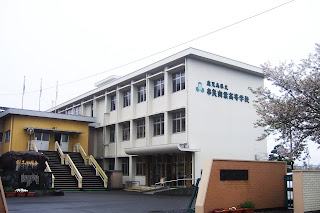 I went to Shogyou on Wednesday, taking a long bus ride (half an hour) to get to the school. Here I had to make a speech in front of the school, again. I didn’t have to do anything else because the school had a Sports Day coming up and had to practice. I watched the school march across the field in slow columns. I asked the teacher about Sports Day and she said that the students would perform racing, cheering, six-legged races, etc. Sports Day is, apparently, an important school wide event all over Japan.

The week went quicker after that. I had to make my introductory speech to classes at Kogyou on Thursday and make my speech to more classes at Nogyou on Friday. The result of this was that I’m now getting very good at introducing myself. I know, for example, how loud I must speak and when to write on the board. I’ve also gotten to see the teaching style of the English teachers. Some, after I speak, ask questions to me and the students, so that the conversation is continued. Some translate every word I’ve said into Japanese, so that I wonder what the point of me speaking was. Some make the students take a quiz. Some dismiss me after I’ve given my speech, others make me stay and read the textbook loud. Some English teachers have avoided me altogether.

As I’ve gotten more used to being in front of a class, two major frustrations have already emerged. First, in all the orientations I’ve been to, in all the speeches that have been made towards me, people say, English is bad in Japan, please try to help improve it. Whether they make this request in earnest or not, I’m taking this seriously. I remember taking five years of Spanish in High School and Junior High. I remember getting a 1 on my Spanish AP test, and worst of all, knowing in my heart I couldn’t speak or understand it. I don’t want the students to feel that way. But I feel restricted. How can I improve English when I’m so inexperienced? And again, how can I even get to know the students (let alone have an impact on them) when I see them so little? (I think some classes I’ll see as little as 2-3 times a semester.) Plus, I’m not in charge of the classroom: the English teacher decides what we will or will not do. Sometimes I feel like I’m no more than a tool to them, like a flexible tape recording or a talking textbook.

Which brings me to my second problem: What is my role supposed to be? That’s tough to figure out. If I’m no more than a teaching tool, does that mean when I’m not in use, I can do whatever I want? Or should I be walking around, making myself seen? I feel like I’m part-teacher, part-ambassador, part-English-speaking-native-brought-to-Japan-to-improve-pronounciation, part-novelty, part-tool, part-in, part-out. My official role is as a teacher’s aid, but I haven’t figured out what that means. I’m above the students, below the teachers, and in a limbo that’s all my own.
Posted by Rebecca Lang at 4:45 PM