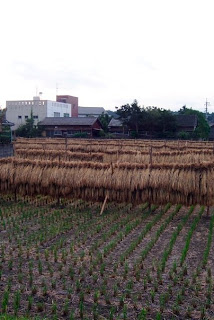 Of course, in my mind, inaka equated to a rural area, which meant cows, a couple of barns, and one streetlight. Kanoya, roughly the size of my hometown of Victorville, was a little more developed than my mental image of “the countryside.” We are probably one of the bigger cities in our area, with several schools, stores, restaurants, karaoke parlors, pachinko parlors, and even a famous attraction: the Kanoya Rose Garden. (Don’t look for it in your Lonely Planet guide; you won’t even find Kanoya. However, to our little city it's a big deal.) Therefore, I resisted the term “inaka.” “We are not inaka,” I said. “We are the suburbs,”

But the term “inaka” has grown on me the longer I stay here. The meaning of the word is starting to shift. What makes Kanoya “inaka” as opposed to a “suburb” is access to the city, or, in other words, a train. Kanoya is one of the few places in all of Japan that doesn’t have a train station; the whole eastern half of Kagoshima Prefecture has no access to trains. In California this is no big deal, but in Japan it severely limits your ability to get around.

“I went to the bookstore here,” said Rachelle, in Kanoya, as we were walking in a department store. “I asked for English books. They led me to the TOPEC.” (The English Proficency Exam for non-English speakers.)

I shrugged. “Well, this is inaka.”