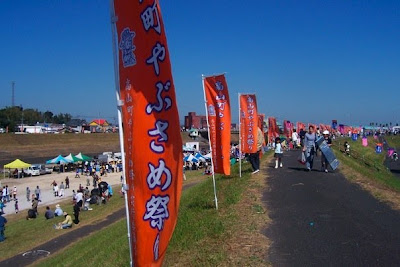 I heard about the horse archery festival from one of my schools, and it sounded interesting, so I decided to go. The horse archery festival, called Yabusame, would be held in a nearby town of Kouyama. I had never been there, but I did know which bus to take, as it was the same bus I took to get to Kogyou, my technical school. The festival was to take place on Sunday, October 21.

The town was decked in festival attire. That meant stands and stands lining the street, with vendors selling chicken kabobs (yakitori) and fried octopus balls (takoyaki) and fried noodles (yakisoba) and fried Japanese-style pancakes (okonomiyaki) and French fries and corn on the cob and shaved ice and ice cream sundaes and crepes and masks, toys, and souvenirs. Some booths had goldfish that children tried to scoop out or other simple games. These booths were everywhere, lining the streets thick. I followed them to the river where there was a stage, a kiddie pool, and a bounce house. But I didn’t see any horses or archers yet.

Coming back from the river towards the bus stop, I caught the beginning of some kind of odd parade. There were men holding lions' heads (not real ones; they looked like the heads of Chinese lion dancing costumes) and men decked in samurai outfits and men in formal Japanese dress and a marching band of elementary school students. And there were two horses with riders. The first rider was a boy of about junior high age who wore purple and had ritual make-up on: his face was white and there were two red circles on his cheeks and one above his forehead. The second rider was about the same age, but wore no makeup. Once the first rider, the one in purple, raised his bow and arrow in an X above his head, the procession got started. The band played and I raised my camera above the crowd to snap a few pictures.

As I went back through the carnival food vendors, I felt at a loss. I expected (as perhaps you did, too) to see some sort of horseback riding, archery competition, but I hadn’t seen more than those two horses, and, walking from one end of the carnival street to the other, I saw no signs of horses. I wondered if I had missed it.

I found a road to a shrine, and since the road was marked off rope and had signs fluttering the words やぶさめ yabusame on it, I thought that this was where the horse archery might be. The shrine was full of burning incense smoke and the priests wore Heian-era clothes. (This means a sort of long, puffy tunic with long, long sleeves and a tall black hat without a rim; it's a style that dates back to the 1000s.) There were no horses; however, someone directed me to where volunteers were serving amazake. I drank a cup of steaming milk, with sweet bean and ginger. Then I spoke to a priest in lavender, who spoke flawless English, and I asked him where and when the archery was to take place.

As I was leaving the shrine, I caught the end of the same parade. This time they were going in the direction I was coming from and there was no crowd. I took pictures. Then I followed them up to the shrine, where the priests performed a purification ritual. They waved branches, played instruments, and clapped.

It was past noon, so I walked back among the vendors and decided to have unagi- cha-don for lunch. As I was finishing my barbeque eel on rice covered with tea (I know what you must be thinking, but as a matter of fact, it was quite good; the eel was delicious), I ran into English-speaking JET participants that I knew; or rather, they ran into me. They told me what I was already suspecting: that this wasn’t a competition, but rather a ritual of sorts. The boy with the purple clothes and white face was to ride down a strip of land and shoot arrows at three targets; if he hit them it meant good luck for the town. The riding was to take place along the road to the shrine.

We passed time watching a mini-parade of masked dancers. The male masks had funny faces and the men danced in a way that was a little…er, suggestive. The female masks were more modest and shy. After that, it seemed like the festival exploded with JETs, because everywhere I turned I kept running into more familiar foreigners.

The actual horse archery was anti-climatic. The angle we (for now I had joined with a group of JETs) were at was horrible and horribly crowded. There really were no good angles to see the archery. The road was thin and one end was against a row of houses. If you stood at the side of the road, you could only see the archer as he rushed by. If you stood by the shrine, you’d see him disappear but the arrow would fly away from you and you couldn’t see the target. Perhaps at the front of the road you could see or else near the targets. But we were nearly up against the shrine.

Through the crowd, I could see the archer and horse circle three times and then, in a burst, run frantically down the road. I could hear the crowd applaud or sigh, when he hit or missed the target. But I could not, for the life of me see the bow drawn back, the arrow flying….

Afterwards, there was a parade of people dancing, and then I went home, on bus again. Some JETs offered to give me a ride, but I refused it. I came by bus, I meant to leave by bus. It was really a matter of pride, to show that I could come and go as pleased me without a car. And so I caught the 4:36 bus with the same group of obaachans and ojiichans. I made dinner, did the dishes, finished my writing, watched Collateral on TV, and went to bed, full and satisfied with my day. 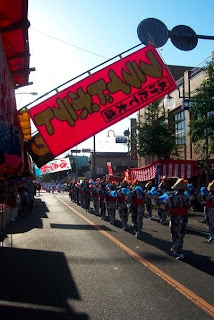