Postcard of Tokyo and Kyoto 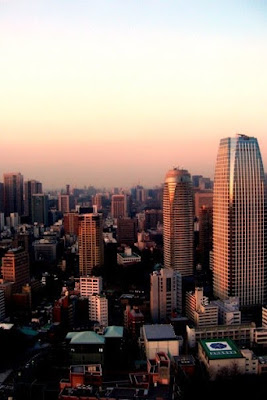 I left for Tokyo on March 20th. A Thursday. A public holiday, by a strange fluke of the calendar. I took the bus to Kagoshima airport, about 2 hours away. I had no problems catching my plane.

Things got more confusing when I came to Tokyo. I came out at Haneda Airport, which was larger, more full of people, and generally more confusing, but that wasn't the problem. The problem was there are two airports in Tokyo. Haneda is for domestic. Narita is for International. My friends were at Narita.

I took a bus to Narita. My friends came on two separate flights, in two different areas, 20 minutes apart. We nearly missed each other, but it turned out all right. We ate dinner at the airport and my friends were impressed by my Japanese speaking ability.

We stayed at the Comfort Inn, in Narita, a suburb of Tokyo. It was a business hotel, which meant it was much like any normal hotel you’d find in America, but a little more condensed.

The next day, we went by shinkansen (bullet train) to Kyoto. Jenny and Hedy learned the perils of over packing, as they were forced to drag their enormous suitcases up and down stairs, onto trains, and through stations of moving people. Once in Kyoto, we got lost trying to find our hostel. Finally, we took a cab.

We stayed at the BaKpaK Hostel. We shared our room with about twelve people, including boys. But really, the only problem I had was that we had to be quiet at night and in the mornings, so as not to wake people. Oh, and I couldn’t just dump my stuff everywhere, either.

That night we ate Ramen and explored downtown Kyoto. I might have seen a geisha.

On day three, we finally got to do some sightseeing. I pretty much set the agenda. First we went to the Imperial Palace Park. The actual Palace was off-limits, but we had a pleasant stroll and enjoyed the flowers. Unfortunately, Jenny lost an earring.

We went to Ryoan-ji, a temple with a famous rock garden. The rock garden was a little disappointing. It was small. We had more ramen for lunch. (I was starting to get sick of noodles at this point.) Then we went to Kinkaku-ji, the Golden Pavilion Temple. The most impressive thing about that temple was it’s ability to attract hordes of tourists, but still photograph like you were the only one there.

Our last stop was Nijo-jo, a castle. It was a small castle, but I loved the architecture. On the way back, we took a jam-packed bus. I swear, no train in Tokyo was more crowded than that bus. We were tired after that so we had dinner, did a little shopping, watched a bad T.V. movie after that.

The next day was Easter Sunday. We rented bikes. We rode to Heian-jingu, a shrine with a nice garden. We also rode to Nanzen-ji, a temple with paintings of tigers leaping through bamboo inside. I had been to both places before, but liked them better the first time. We also went to a craft center and I bought two yukata (light cotton kimono) for 3000 yen each.

The fifth day, we moved from the hostel to a ryokan near Kyoto station. A ryokan is traditional, Japanese-style hotel. It has tatami mats and you sleep on futons on the floor. I find it more comfortable than business hotels. The three of us shared a room. We had more privacy that way.

I was glad that we transferred hotels, even though the move took all morning. Now that we were closer to the station, we could make day trips. After lunch (donburi: meat over rice), we decided to make a short trip to Uji, a city about fifteen minutes from Kyoto, and then stop by Fushimi Inari.

I wanted to go to Uji because I wanted to see Byodo-in, the famous Phoenix temple, which is featured on a 10-yen coin. It was a very nice old temple. We also visited the shrine, a world heritage site, and crossed some bridges. Uji was a nice little town and we liked it very much.

We bought Bento (boxed meals) at Uji and took them to Fushimi Inari. Fushimi Inari is a shrine on a mountain, famous for tunnels and tunnels of orange torii. We decided to go in the evening, when it was most creepy, and have a picnic on the mountain. Hedy was unfortunate enough to get natto sushi. Natto, fermented soybeans, is one of the nastiest dishes in Japanese cooking. We climbed to the top of the mountain. Then it got dark. Going down, Jenny and I began to get frightened, but Hedy had nerves of steel.

The next day I got dressed up and wore my yukata. Hedy did my hair. Jenny wore a dress and Hedy a skirt. We went to Nara. We fed the deer and saw the big Buddha. Then we came back to Kyoto and went to a swap meet. We went to an onsen, a hot springs, though in this case it was more of a public bath. That’s right, a bath: you go in naked. Hedy didn’t go. Jenny and I did, because we had gone out of our way to find the place and were very footsore. Needless to say, it was a little awkward. I regretted wearing my yukata to the onsen. It was hard to put it back on and a felt a little like a tourist.

After that, it was our castle day. We went to Himeji, which has an old, famous castle. Then we went to Osaka Castle, which was a recreation of the original. Inside the castle there were museum exhibits and I brushed up on my history. We also went to America Mura (Village), a shopping district in Osaka, which, despite it’s name, was nothing like America and not so much as a Baskin Robbins in sight.

The next day was Thursday again, March 27th. We packed our bags and went back to Tokyo, by bullet train again. We met Rihito, who had been a Japanese exchange student when we went to college at Redlands. He took us to the Tokyo Tower, which had a magnificent view. We went to dinner at TGI Fridays. I was so happy to go to an American restaurant. I ordered fajitas. I knew I missed Mexican food. I had no idea how much I’d missed sour cream. (There’s none in Japan.)

We went back to our hostel. The Sakura Hostel was located in Asakusa, the old entertainment district in Tokyo. Our hostel was really small. There was almost no space to house our luggage and we couldn’t spread out at all. The lounge was always full of people, so we had no space to call our own.

For breakfast the next morning, we went to a conbini (a convenience store) and bought bread. We carried our food to Senso-ji, the temple in Asakusa. It became our breakfast spot. We would sit on the steps, under the sakura, and watch the strange things that happened. Once there was a TV show being filmed. Another time, some sort of festival was going on. When we finished our breakfast, we’d walk down the path, lined with stores, until we got to the subway.

That day, we went met Yuki, another exchange student. We walked around the park and looked at the sakura, the cherry blossoms, now in full bloom and splendid. Then we walked around Harajuku. Despite the Gwen Steffani hype, it was really rather ordinary. We had all-you-can-eat, make-your-own okonomiyaki for lunch. Okonomiyaki is like a savory pancake. We did more shopping and were surprised to find that even in Tokyo, department stores close at 8:00 on a Friday night. Like in Kanoya.

The 10th day we went to Ueno, a park. I wanted to go there because the final battle of the bakumatsu had been fought there in 1868; afterwards, Japan entered its modern era. However, the presence f so many people doing hanami (literally looking at the flowers; having a picnic to enjoy the sakura) rather distracted me from the historical element. We went to a very nice museum, which gave a history of Japan through art and artifact. Then, we visited a cemetery.

After lunch we walked down a street near the park, Ame-something. It was an old street. It was completely packed. We didn’t so much walk as ooze. That was, without a doubt, the most crowded shopping area, this obscure street.

We went to Shibuya, a more modern shopping area, and I found a whole floor of English books in a Tower Records. The fantasy section alone was the same size as the entire English self in my bookstore in Kagoshima. I was so happy. My friends just left me to browse while they did more shopping.

For dinner, I treated them to yakiniku, or Japanese-style barbeque. They had fun, and so did I. It was our last evening together. Hedy was leaving the following day.

The next morning, after breakfast at Senso-ji, I took Hedy to the airport. We decided to split up, so Jenny could do more shopping. (She was starting to get frustrated about finding souvenirs.) Hedy and I had a nice chat on our train ride to the airport. Unfortunately, I had underestimated the time it would take to get there and back. I was late and kept Jenny waiting for over an hour. We did more shopping. Then we went back.

This, long as it seems, is a general overview. I tried to write long in-depth ancedotes, but I ran out of steam halfway through, after about 20 pages or so. For the half I completed, see the anecdotes.
Posted by Rebecca Lang at 9:59 PM