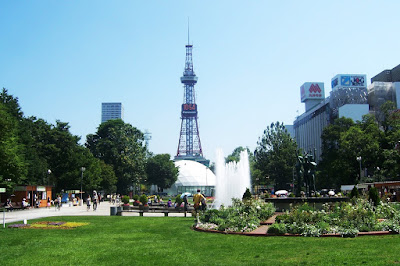 If you imagine the island of Hokkaido to be an uchiwa fan (not a folding fan, but the kind with a big circle of paper on a stick), then Sapporo would be where the wood and the paper meet. It’s almost in the center of Hokkaido. Within the city, I didn’t notice any hills or rivers, which are typical features in Japan. In fact, when I got out of the train stations, I wondered if I was in Japan at all.

The city seemed too… spacious… to be Japanese. I could see the blue sky peeking out in patches between the skyscrapers. For some reason this reminded me of LA, but not quite LA. The streets were lined with leafy green trees and statues were spattered here and there. In the front of the station sat red-bricked vine-covered department stores, which alluded to Hokkaido’s Meiji past.

Saturday morning the weather was very fine, nice and cool, and I could wear a light sweater without feeling warm. But I was still a little flushed from my stress sickness, so I kept my sweater off. In keeping with my “relax” motto, I didn’t go very far: just a ten minute walk to the Former Hokkaido Government Office Building and another ten minutes after that to the Botanic Garden of Hokkaido University.

Hokkaido’s history, as an important island of Japan, didn’t really begin until the Meiji Restoration, that is, the late 1800s and early 1900s, when Japan was rapidly making itself into a modern nation. That was the reason for so many red-bricked buildings in Sapporo, including the Former Government Office. It was a large, stately building, and looked more European than Japanese.

Inside were a free museum and several paintings by local artists. As I looked at the artifacts—a black and white unsmiling photograph of children near their new school, advertisements of fish sketched in colored pencil—it occurred to me that Hokkaido was a lot like the American west. Around the time, American settlers were crossing the prairie by train and fighting in the Cowboy-Indian Wars, people from poor fishing villages in Japan were urged to “immigrate” to Hokkaido with the promise of cheap land and new opportunities. Even in the paintings, I could see a physical resemblance: the vast blue skies, the wide yellow plains punctuated by dark mountains, people on horses, people who would tame this new land, but looking somehow small and insignificant compared to the rolling landscape.

In fact, Hokkaido even has its own “Native Americans,” a group of hunter-gatherers called the Ainu, who flourished in Hokkaido long ago. In the Botanical Garden, there was a museum of Ainu artifacts, such as a seal skin jacket and intricately carved rice paddles. I watched a video of a sacred ritual involving a bear in a cage (poor bear) and admired the altars of woven grass. But what impressed me the most (and not in a good way) was a kind of smelly plant they hung near their houses to ward off demons. I believed it could ward off demons; in the stuffy museum, the scent nearly overwhelmed me.

The museums (there were several) in the Botanical Garden were nice, but the actual plants didn’t impress me. In the middle of summer, it was nice and green but there were no flowers. With one exception. On my way to a sadly withered rose garden, I stumbled upon a patch of Hydrangeas in full bloom. Vibrant blue and rich purple blossoms, clothed in alternating shadow and sunlight. Beautiful.

Slices of white tofu were garnished with sauce, chopped sausage, and chopped cheese. I don’t know if the sauce had beer in it or not—maybe. In the beginning I thought it tasted strange, but the more I ate it, the more I loved it. The sausage and cheese were excellent. Even after I finished my tofu, I scraped up the crumbs with the tip of my chopsticks. 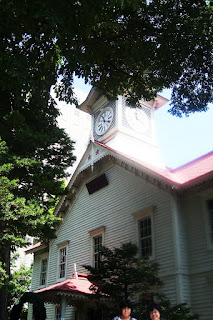